Rightly dubbed as ‘the greatest literary show on Earth’, Jaipur Literature Festival has become an annual literary platform for knowledge-sharing conversations and beyond at Diggi Palace in Jaipur. To retain its exponential recognition and connectivity with the audience on different platforms, we have been executing various digital verticals since last few years. We did same for this edition of JLF as well and deployed a host of digital services for the masses. We improved upon the services with experience of past years and united people on the grounds of literature and culture.

Live Streaming
During five days of JLF ’18, we were present on-site to live stream all the sessions alongside recording the content for archiving as well. It was being streamed live in high definition on the official YouTube channel, website, Twitter (via Periscope) and Facebook page of JLF where people from all over the world were able to watch the stream from their resident place. It provided them with a chance to experience the content broadcasted direct from the grounds on their personal screen. 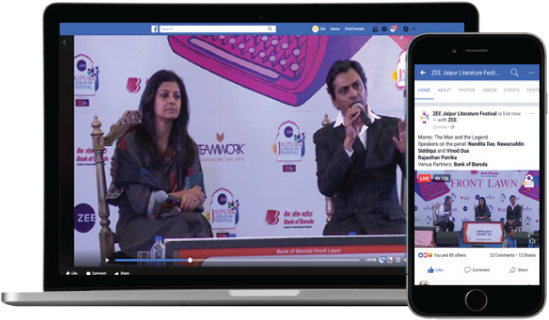 Digital Video Archiving
Video archiving is beneficial for saving the content and making it accessible to people when they want. This is why we archived all the sessions which happened during the five days schedule. The archiving was happening parallel to live streaming so that the sessions were available at the earliest for viewing on YouTube. In addition to saving the videos for future reference, this helped in engaging the virtual audiences who were not able to attend the sessions live as well. 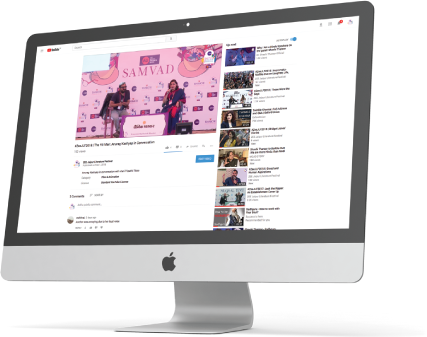 Social Wall
There are several ways by which an event can acquire a meaningful social media presence and one of them is implementing a social media wall. The events, for example, are not only a way to share information with an audience, rather a way to interact with them. The more your audience is encouraged for posting, more feedback will be received and the impact would be lasting. This can be achieved with a good social wall. All these benefits encouraged us to deploy a Social Wall in the JLF ’18. The social media wall collected and displayed Tweets (being tweeted from & beyond the event) and photographs of the proceedings being clicked real time at the event. The content was fetched from the posts containing the event hashtags and direct tagging. 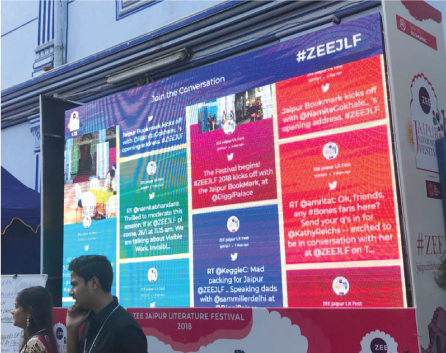