For decades, Pepsi has always been on the upper hand whenever the talk was about creating some exceptional marketing campaigns. Do you remember the ‘Yeh hai Youngistan meri Jaan’ cult and how the youth of the time went a little mad about it? Or the ‘Change the game’ campaign which exponentially enhanced our World Cup experience. Yet again, Taking forward the same legacy and not disappointing us even a bit, Pepsi launched its global campaign ‘The PepsiMoji’ in India.

The campaign was launched in March 2016, and with consistent efforts had created a wide visibility over television, print and digital media. The paramount concept behind the Emoji campaign was to capitalise on the internet’s mode of ‘wordless conversations’. As per a statistical study, over 6 billion Emojis are exchanged over the internet as a part of or rather as a mode of communication among over 2 billion users of smartphones. Interesting! Isn’t it? Thus, from there started the work of Pepsi’s designing team and they began to create a unique PepsiMoji packaging for every bottle of Pepsi. That is how we got such expressive Pepsi cans and bottles; perhaps, to top it up – a way to ‘Say it with Pepsi’.

Well, that wasn’t just enough of what Pepsi had planned to do with the help of the #PepsiMoji army. Thus, they took it to a different level by organising some fun outdoor activities and spreading the charm of the smartly designed campaign roll call – “Jesa Mood, Wesi Pepsi”.

Recently, the brand hit the road and targeted a college located in Delhi. You must be wondering why a college? Well, the brand goes where the target audience is. Also, they planned it extremely well. Keeping in mind that it is the occasion of exam season and a pack of the college students will be hanging around with dull faces and stressed minds. As follows, what can be a better moment than this to use the – what they call a – “Mood Vending Machine.” 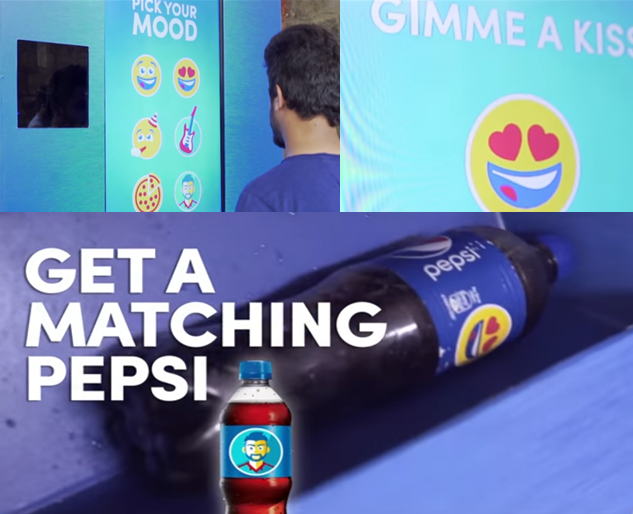 They placed the “mood” vending machine in the campus corridors. And, for how sassy it looked, it immediately grabbed the attention of many. What followed next was just amusing, lively and a great deal of customer interaction.

The students went on to choosing a mood for themselves among the range of PespsiMojis carved on the vending machine. And with every Emoji was a task they had to do. No, nothing tedious, just simple and entertaining actions they had to perform or imitate. So, as you perform the task the mood vending machine gifts you a Pepsi for your mood.

Evidently, the crowd went hilariously crazy and super excited. Surely, Pepsi is going be the talk of the college for a good number of days now. Yes, strategically speaking Pepsi managed to pull off an amazingly fun promotional strategy by using the essence of digital activation in just the right way. The outlines of the campaign which made it work are pretty conspicuous. To mention them, the list goes like:

The Campaign was not just a regular promotional strategy but a finely crafted marketing plan precisely using the advantages of digitalization. Clearly, a master digital activation strategy nicely planned and executed in times when brands are still struggling to use digital signage as the crackerjack for their marketing efforts.  Way to go, Pepsi. Hats off!